World changing ideas, interactive performances, snapshots of pillars from various scientific disciplines and a complete immersion in the world of science with a magical skillset.

We have a wide range of fantastically fascinating shows that we can bring to your venue. You can choose from our themes, or have us create a bespoke show just for you! We can produce amazing material for any audience, in any area of science you require. 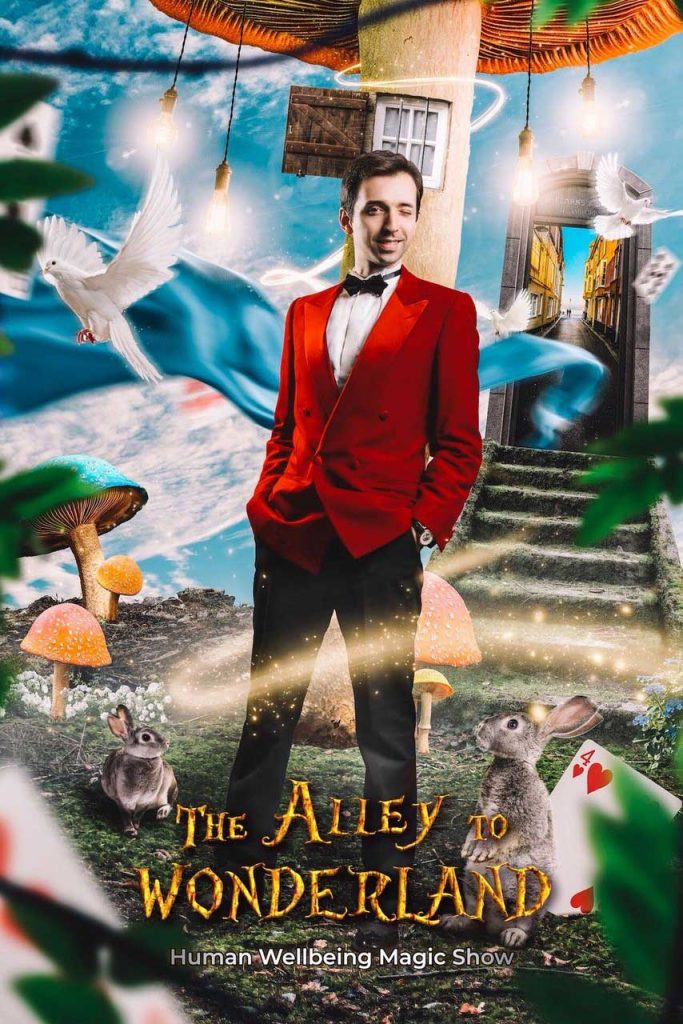 THE ALLEY TO WONDERLAND

To flourish is to have a high level of mental wellbeing, and ultimately to have a good mental health. Join us in this magical journey that explores ten features of positive wellbeing. This show will help your students discover how magic can trigger and boost all aspects of well-being. This show is perfect for students who need an interactive exploration of their own sense of competence, emotional stability, engagement, meaning, optimism, positive emotion and relationships, resilience, self esteem, and vitality! 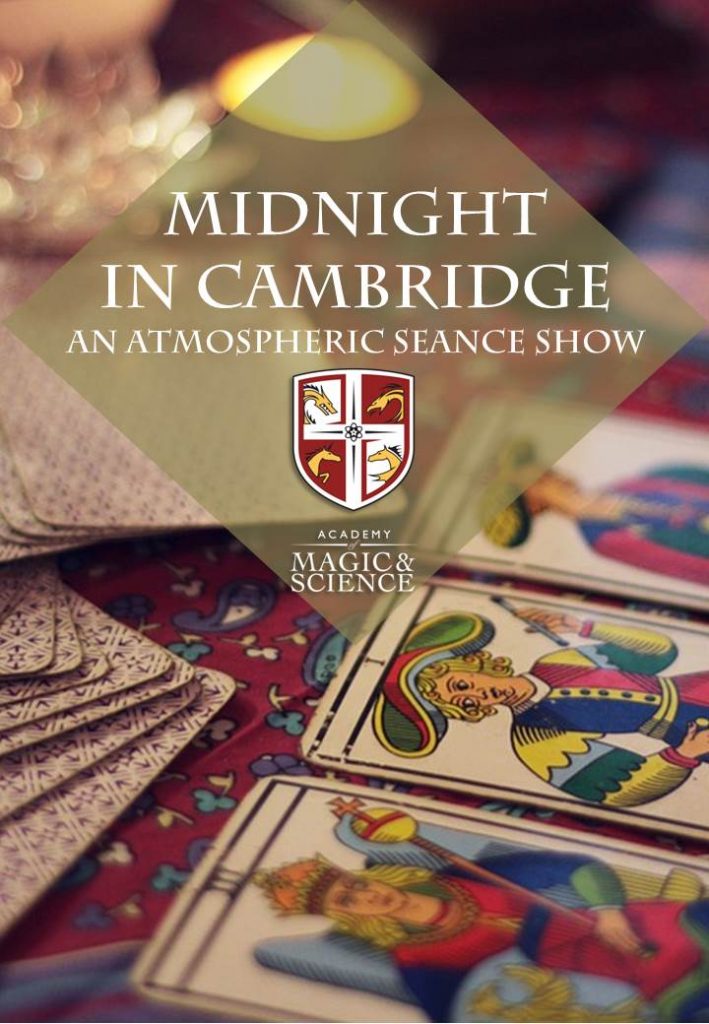 Take a seat in the red room, but don’t get too comfortable, we will step back in time as the spirits of our town’s historical figures come to visit. In an immersive atmosphere of a seance, where we will converse with ghosts and ghouls, prepare to have a hauntingly good time with the phantoms of Charles Darwin, Isaac Newton, Robert Oppenheimer and more… The Seance - a magical show, atmospherically performed! 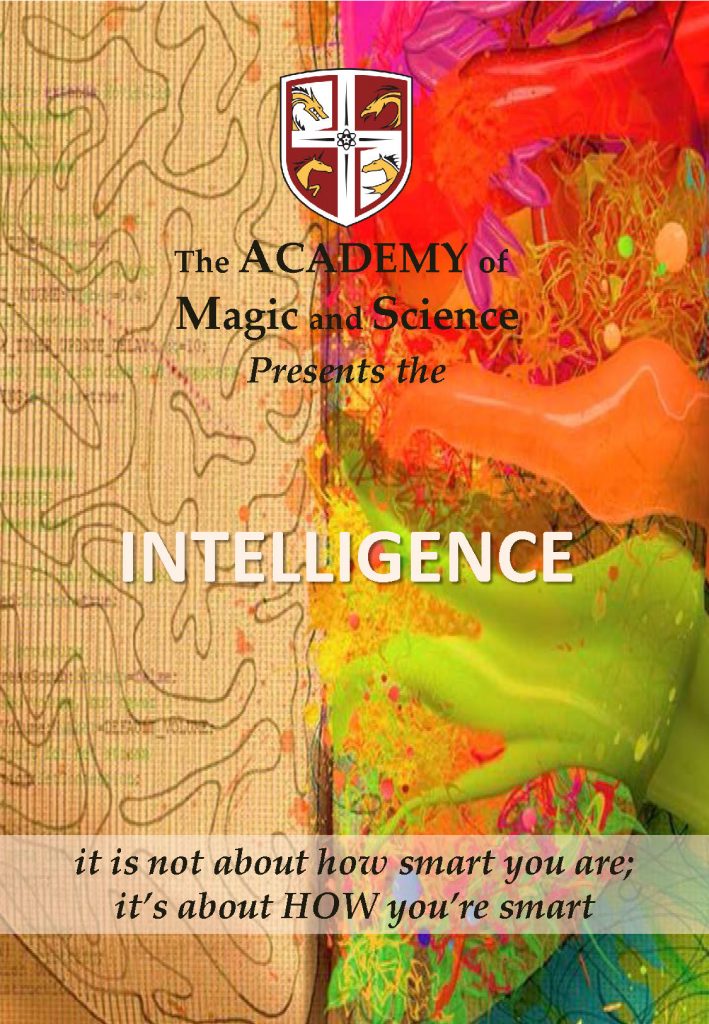 Discover the full spectrum of your intelligences in a magical interactive show! What is beyond IQ, how can we train interpersonal intelligence, how can we trick our spacial understanding of the world, why our existential questions get forgotten, which are the illusions in our kinesthetic coordination and how our linquistic abilities assist us to communicate without misdirections? When can a musical ear become spelled, how our naturalist abilities bend the laws of nature and how can we perceive truthfully ourselves in a world of magic! Based on the multiple intelligences theory of Dr Gardner, Harvard 1983! 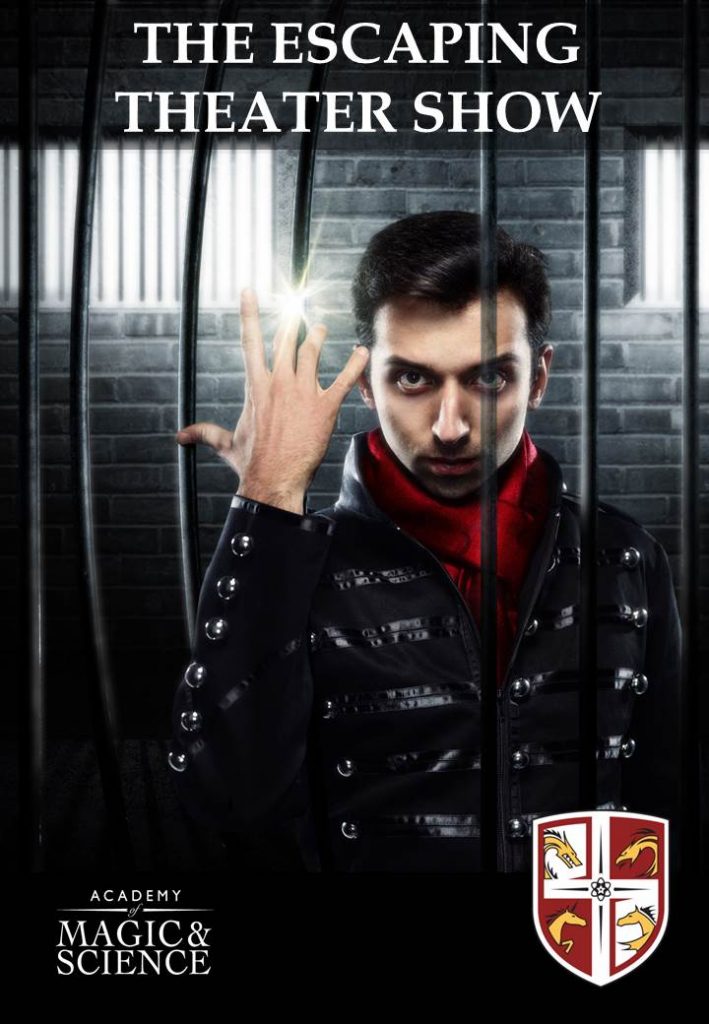 Breaking out of the zodiac in this magical escaping show Have you tried an escape room before? What about an escape show? In the Greek mythology Andromeda was the chained princess who was sacrificed to be fed to a sea dragon. The hero Perseus transformed the monster into stone by showing him the head of Medusa and freed the princess. What will it take you to escape the zodiac? Join forces with 4 illusionists to solve magical riddles, defy scientific principles, make decisions, succeed in challenges and unlock the mythological mysteries of the zodiac constellations in an interactive magic & science show! 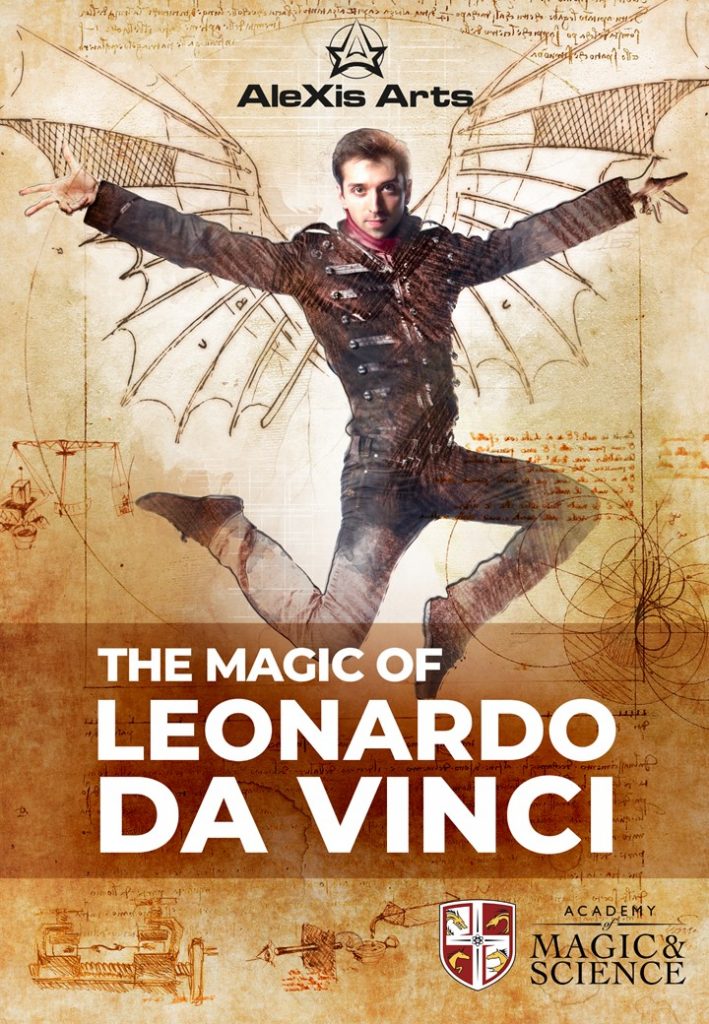 THE MAGIC OF LEONARDO DA VINCI

Have you ever wondered if there is a place in the world where magic is happening every single moment? Have ever wished that you could be part of this magical world? Well, prepare your broomsticks, because here is your chance! The Academy of Magic & Science proudly presents the exclusive show of the MAGIC OF LEONARDO DA VINCI! This creative genius had many talents; Leonardo was a peaceful painter, a military inventor, an engineer, a writer, a musician, an anatomist and … a magician! He designed machines to make us fly, to give us superhuman powers, to decode observations and to not allow anything misdirect us. This interactive fantascientific show will create the WOW excitement moments of magic and drive them to evolve into AHA realisation moments of scientific principles! How was cinema invented, how did the first electrical light bulb come to life, how did automation evolve, how did things start to fly and most importantly... what is the recipe for the philosopher's stone? Join the Academy of Magic and Science to explore the hidden secrets behind these inventions and match the rigorous, scientific engineers, chemists, physicists, astronomers and doctors to their concealed doppelgangers of alchemists, astrologers, wizards and other magical creatures! 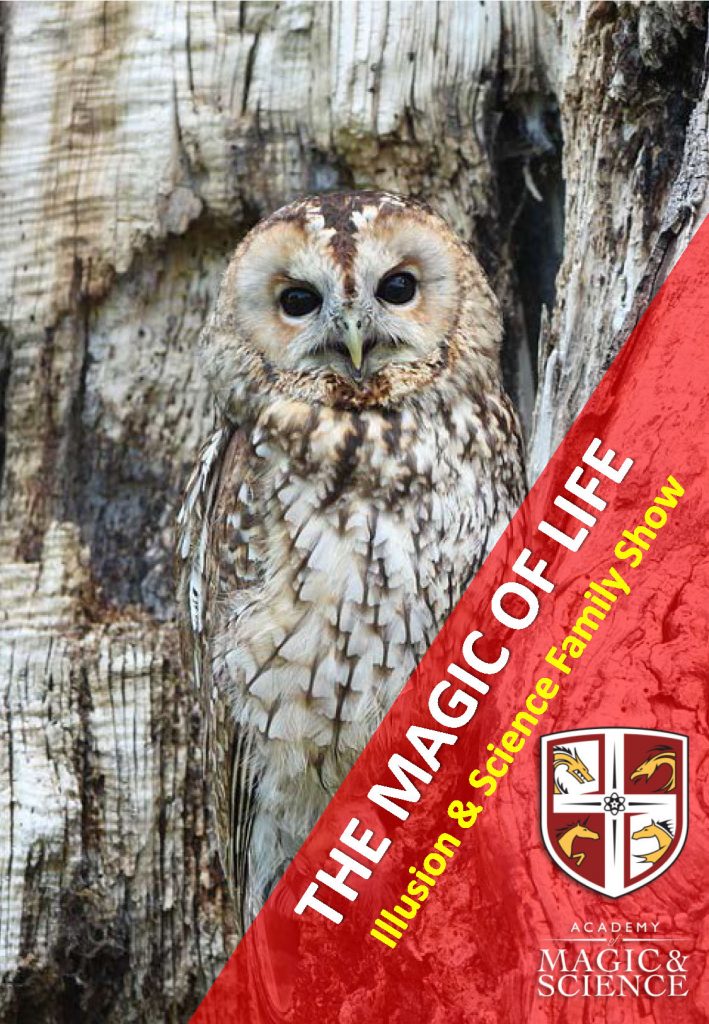 THE MAGIC OF LIFE

What magical powers would you give to a mythical creature or fantastic beast? An introduction to the workings of life from the cell to physiology and the ecosystem, this interactive illusion show will explore how life is formed and how organisms survive, by giving secret powers to a magical creature - that we will create live on stage! 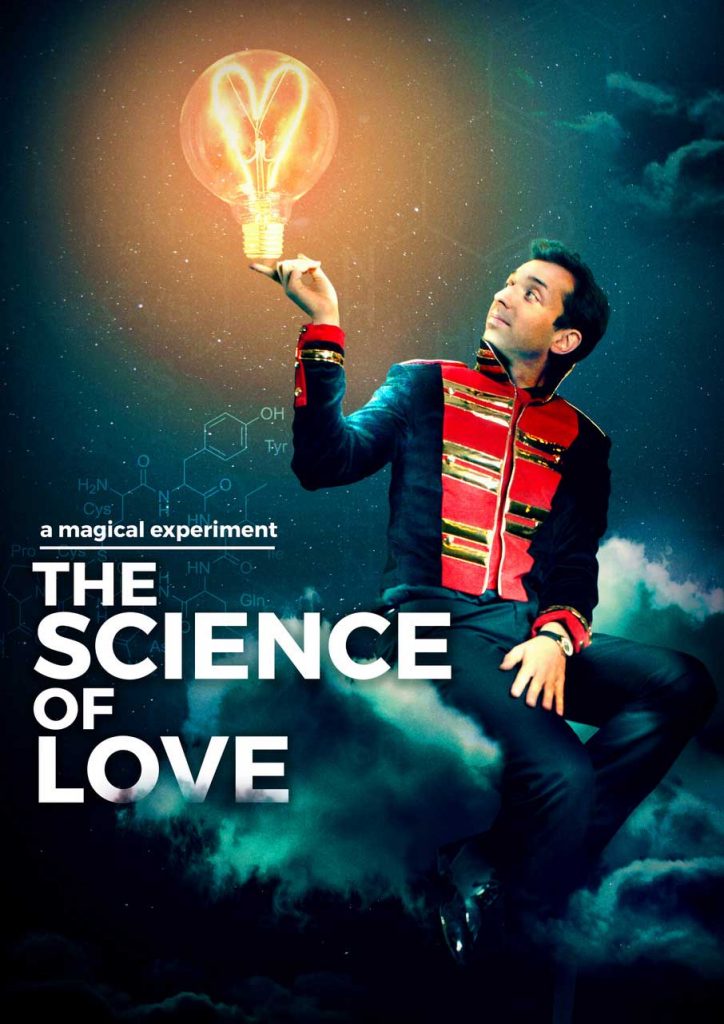 THE SCIENCE OF LOVE

Are we falling in love due to gravity? Is it a magical trick of cupid or an alchemic reaction of oxytocin? Does love grow through songs and romantic poems, magic spells or releases of dopamine? The World Champion of Big Stage Illusions and several Guinness World Records holder, Alexis Arts, will take us through the magical experiment of THE SCIENCE OF LOVE. Prepare to challenge your perceptions on romantic love, to question the accuracy of your romantic sensations and feelings of intimacy, passion and commitment. How? By magic! Join as a couple, single, family or anything in-between and this show will make your questions about love vanish and sparkle charmed sprinkles on your heart-syncing through scientific explanations and magical demonstrations and may finally settle the eternal battle between the mind and the heart! 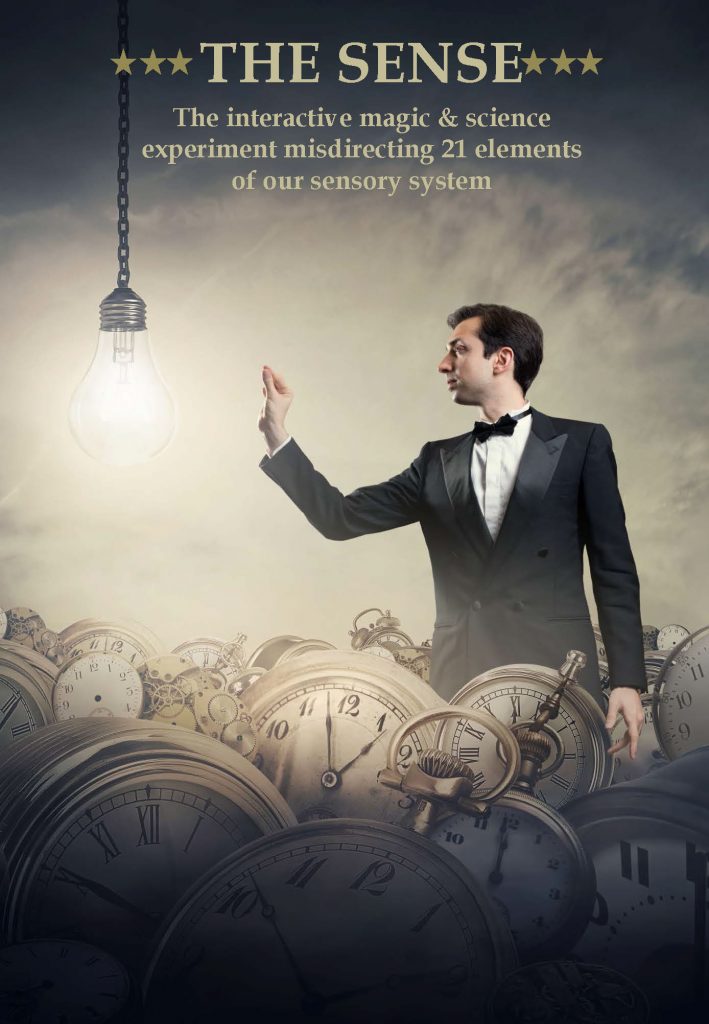 What does it mean to sense something? How do our five senses help us to perceive the real world? In this magical experiment, your students will learn how illusionists understand sense to then manipulate and misdirect our attention. This is truly a journey in the mechanisms that control how we experience the world, discovering what is beyond our classic understanding of the senses. We will illustrate the 21 elements of our sensory system… and misdirect them all! This lecture show is a perfect compliment to learning about the senses in science lessons, but also helps to provide a different, magical, perspective. 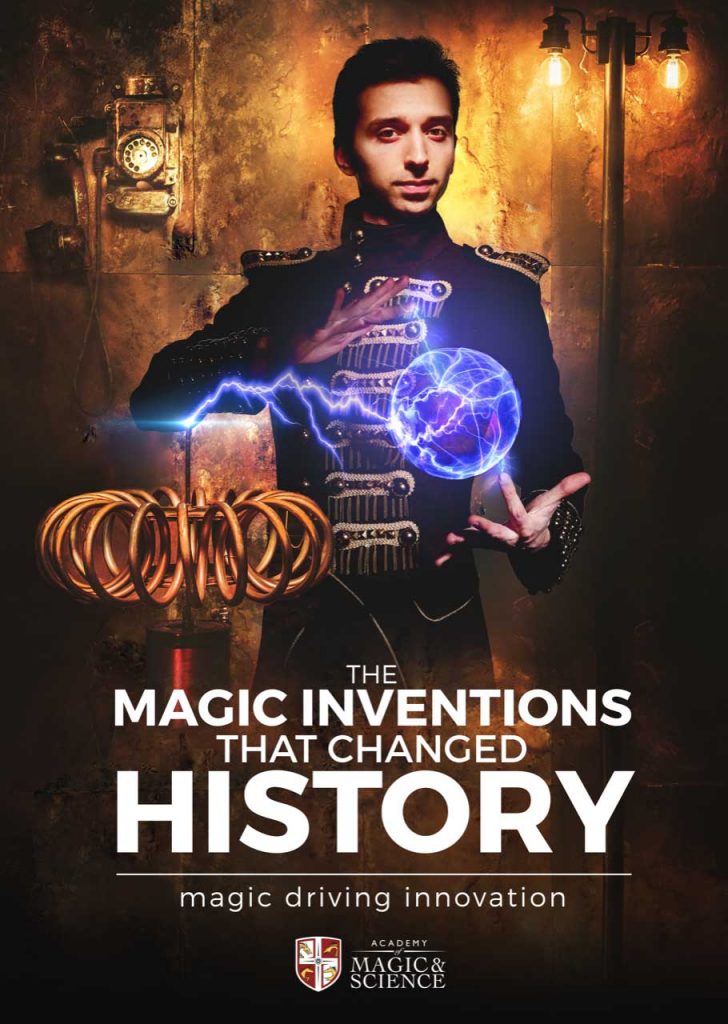 THE MAGIC INVENTIONS THAT CHANGED HISTORY

From mechanical tools to chemical reactions and from electrical devices to flying and disappearing objects! Embark on an enchanting journey exploring the spell binding inventions that changed history and transformed life, as if by magic! While the purpose of magistery was always to produce mystery and awe, some of the most history changing tools, devices and practices were invented by magical scientists that kept them secret to captivate their audiences! And as expectations and capabilites were evolving, they kept innovating, producing technologies that at the time seemed as if they were magical! How was cinema invented, how did the first electrical light bulb come to life, how did automation evolve, how did things start to fly and most importantly... what is the recipe for the philosopher's stone? Join the Academy of Magic and Science to explore the hidden secrets behind these inventions and match the rigorous, scientific engineers, chemists, physicists, astronomers and doctors to their concealed doppelgangers of alchemists, astrologers, wizards and other magical creatures! 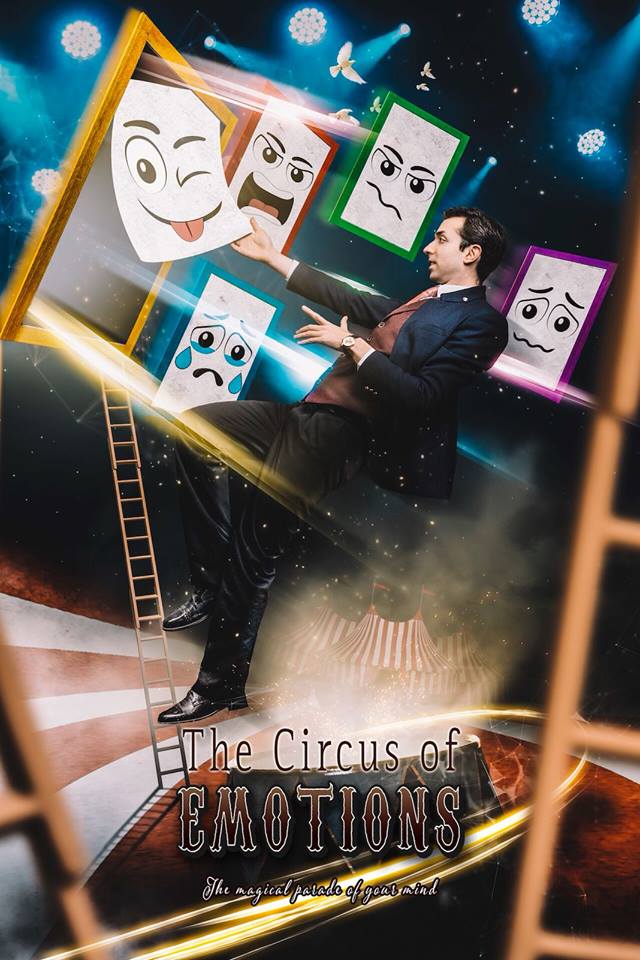 THE CIRCUS OF EMOTIONS

An interactive show, set in the core of the stage of our emotions that lead us through illusions and wonder in the fantastic workings of our soul! Emotions take leading role in a performance as if in a circus, or a maze, demonstrating their purpose, their expression, the way they are activated, their way to form memory and their tricks to shape our personality! 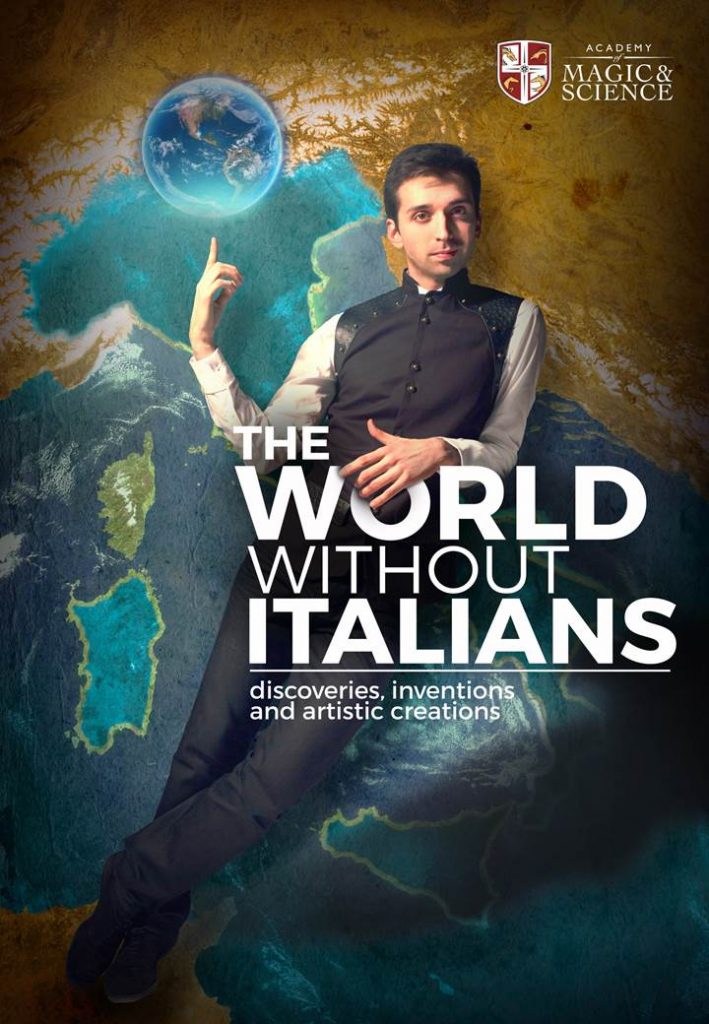 THE WORLD WITHOUT ITALIANS

A magical exploration of inventions, innovation, discoveries and artistic creations of the Italian people that shaped history and the world as we know it today! How would our world look like if Italian people never existed? What life changing inventions were the product of these people, embedded in their own unique culture?

BOOK FOR YOUR VENUE

BOOK A SHOW FOR YOUR VENUE

We can bring our range of dynamic shows and workshops to your corporate event, company, school or community venue. If you would like us to visit to your venue, you can make a booking and select one of the themes, or ask us to customise a show for your special occasion.

BOOK A SHOW FOR YOUR VENUE

Thank you for your message. It has been sent.